Edit
watch 01:36
We're Getting Mutants in the MCU - The Loop
Do you like this video?
Play Sound

This is the fifth story written in a literary format. This story is notable for alluding to a forum moderator, Kyurem To The FACE. Similarly the leaderboard fighter, Voider, is assumed to be a reference to the wikia editor Voider98. It follows the rare form of the leaderboard reward, Quwha, and the uncommon form of the points prize, Irax. It introduces a town or city called Slight Complication, which can only be accessed by a magical and mechanical entrance which requires a call and answer passcode to be allowed in. Quwha is disturbed by a prophetic Idea that has plagued him for six moons, and it is revealed in this story that others have had the same Idea. 'The Idea', as it is referred to, is not explained in this story, however it is outlined in the following event Connect the Dots story. The landscape of Area 2 in Normal Mode, the territory of the Hemi, is described as being totally deserted and in some cases, razed by a Mr. Goodtime who is yet to be explained. The reason for desertion is also explained in Connect the Dots, however at the time it was not clear.

Tell me, o tell me
What thoughts are those
That you would fly to Innisfree?

Ask not, o ask not
What answers I have seen
Time's dark waters drown all thought.

--Things Lost in the Migration

He had tried to put it out of his mind, that he could swear to. But ideas were like the Norsewoman's mangy cats, slipping back in through a window every time you kicked them out the door. Sometimes, the idea seemed to be having him, not the other way around, taking him to places and people that made the idea stronger. People like Tamric and Mr. Goodtime. Places like here.

Quwha reached the Slight Complication by the smooth road, passing the same landmarks he had of old when the path had been a heartsore thing called Wellmeant. It still gave him a pang to see the old ruins gone. What lost tribe had it been who raised that great city before leaving it for the elements? Now no one would know to even ask the question. Mr. Goodtime and his kind had pulled down the megaliths and Oldtown both, erasing the glory and the shame alike.

"Cure 'em," creaked the clockwork owl at the boundary. "To the face," he replied and felt his ears pop as an entryway opened. Anyone watching him would have seen him disappear into thin air, but the road was empty this time of the day. Quwha himself kept a wary eye on the opening as he slipped past the barrier. The power that gave rise to the Slight Complication was entirely new, a brew of magic, nature, and machine that was beyond his ken--but apparently not his curiosity.

The noise hit a moment before the heat. The sun careened off the brass hides of great clockwork elephants that stood in swaying herds, connected by footbridges busily traversed by gracious hippogriffs and rough-hewn ladies. Hanging racks half as long as a dragon full-grown sped by on whistling wheels, with what looked to be freshly-built endjinns wetly slapping against one another on the ends of great green hooks. A horned gallant and decorous mermen waved and hallooed. As a sprite hunter, Quwha had secretly traded with Oldtown and there were many here from the old days still. Magic for magic, that had been his way, trading formal knowledge from the great centers of learning for the hybrid vigor found only in the hinterlands. The sprites and skills created by Oldtowners, he sold in Louran and Castletown, passed off as the work of anchorites and hermits. For every mage that balked at purchasing skills, there were two that were less particular, and as for the gallants, they liked their magic just like their armor: expertly made by their social inferiors. Their good coin and easy contempt, he kept for himself, but any lore and learning gained on these transactions went to the hemi of Oldtown. Quwha liked to think that in his own way, he had helped usher in a new era in Texel, where magic was the province of all and power had many names.

Louran called theirs sorcery, he mused, tapping the pommel of his sword. Castledown preferred craft, and what the misbegotten of Oldtown did, they had called crossing. But here in the Complication, he thought as he wove his way through a maze of colorful biblio balloons drifting waist high, what did they call it here?

"We call it dreaming," a voice called drunkenly. Someone laughed, and others applauded. There was the sound of crockery breaking and derisive cheering. Quwha's feet propelled him toward the noise, even as he cursed himself for a fool. Not even the Mage Queen could read minds. Why then, was he so certain that this stranger had been talking to him? And, it suddenly occurred to him as he came face to face with the owner of the voice, was he here to be proven wrong--or right?

"Piss off," Irax mumbled over his shoulder. The remains of a wine bowl crunched under a massive foot and he scowled. Why he came back to this benighted place, he didn't know. Yes he did. Just to make sure, aye. Make sure that it was still there. Besides, there was never a defender to be found in the Complication, and he liked that just fine. Gave him the shivers, the defenders did. Ever since he'd hit on The Idea, he couldn't look at one of their moonlit little faces without going half insane. Wondering if they secretly knew what was going on. Having a bit o' fun with the little folk. He wiped his face and realized he was weeping. Damn it, what was the point of it all?

"It'd be worse if they didn't know, don't you think?" It was some tall fella speaking to him, fair bristling with good Castletown steel and holding out a skin of water. Irax took a grateful swallow, then another. His head cleared, and he groaned. If this fella could tell what he was thinking, The Idea had to be real, didn't it? Briefly, he thought about going back to Carboy's for another bowl, then found he'd lost his taste for wine. Six moons, he thought with resignation, after six moons of running scared, it's time for something else. He handed the skin back and gestured to a stack of pallets that didn't seem to be much in demand.

They sat together in silence a while, passing the water skin back and forth. Irax tilted his head back and felt at peace for the first time in a good long while. Not a cloud in the sky, nor a drone. The pallet creaked beneath them. "My name is Quwha, who is to be Nittiatte, who is to be Voider," said his companion. "And I have an idea that I think you need to hear." 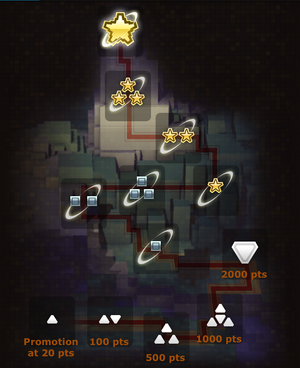 In PvP, there are Brackets. Players are placed in a Bracket Leaderboard which consists of eleven Echelons and a pre-Echelon Phase. Players are promoted through Echelons by gaining points. Upon reaching 2,000 Points, they are promoted to Echelon VIII, where promotion is determined by bracket battles.

Bracket Battles involve players competing against other bracket players to gain the most points within a day. The people with the most points get rewarded, some remain standing still on the Echelon, and the worst may be demoted to a lower Echelon. 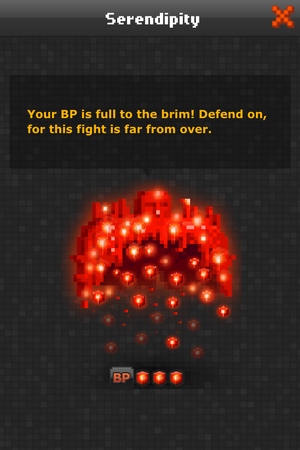 Once you have elected to fight Other Defenders, you will have 10 minutes to complete the encounter.

For each Other Defenders Encounter, there will be a selection of three opponents to battle, each giving an increasing amount of points with difficulty. After defeating one opponent, another three options will be given. This is repeated until you have defeated three Other Defenders, lost a battle, or run out of time.

Winning all three battles of this Encounter will grant you a "winning streak" bonus. Getting your winning streak to 30 will reset the win streak count and give you rewards accordingly. However, if you lose a battle, your streak will reset to 0.

Opponent's difficulty are calculated based on the amount of 30-Win Streaks completed. The difficulty is reduced when you lose battles.

Occasionally, when encountering other defenders, players will enter a Frenzy, which lasts five minutes. During this time, players will receive double the points when victorious against opponents.

An addition to this event was a Serendipity encounter which would refill your BP at the end of a 3-win streak.

This event saw the return of the Megalomania band. Like the previous event, this band appeared randomly at the end of a 3-win streak, much like Banunurama. The band increases in difficulty and prize potential as your echelon level increases.

Rewards are either Power Fodder or the fighter presented in the line of fighters. In this event, players could receive rares of the Leaderboard Reward, Quwha, or uncommons of the other two fighters, Hunter Gatherer and Irax.

Another returning PvP Battle type is the Banunurama. Occasionally, during PvP battles, players have a chance to encounter a combination of Ikkupi or Banunu and battle them. They are always found on the third battle of an encounter. Winning against a line of three Banunu rewards players with a special prize: ???.

Community content is available under CC-BY-SA unless otherwise noted.
Advertisement